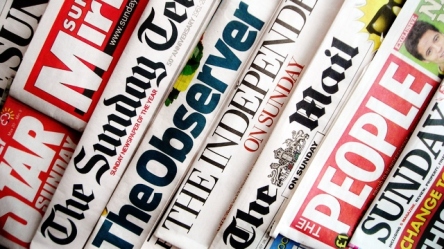 It’s actually quite frightening when I hear young people, similar age to myself, say they take no interest in the news. They don’t watch, read or listen to any bulletins. Many use the excuse that the news is “boring” and much of the content is “depressing” and “negative”. It really is a shame that people don’t want to take note of events happening around the world – the plight of famine in third world countries, alleged election corruption and natural disasters. All events have an effect on the viewer or reader. Whether it be just a simple opinion or an action you take to help. The news is for everyone and everyone must take a grasp.

I have always enjoyed writing, in particular factual writing. Ever since around mid-high school (around 2007) I affirmed my desire to be a journalist. Watching the “grown up” news had me hooked from the start and I began to develop my interests in news and current affairs. At the time, many of my peer group would simply shrug off anything related to the news. Even by the end of my school life, some of my group still didn’t watch or read any news. I always remember a few people, at the age of sixteen baring in mind, stating they didn’t know there was a war in Iraq or Afghanistan. By this time the Iraq war had already started and ended. These people didn’t even know about it. All to their own, it’s a personal choice whether you watch a news programme or read a newspaper, but it was really quite fearsome that some sixteen year olds had no idea about the casualties and what the war had entailed.

I suppose my love of news and current affairs goes back to before school. Quite literally. My Dad would come off his night shift at 6am and without fail would always bring in a newspaper. He still does. Whilst waiting for the rest of the family, I would take a read of the paper. If there was no newspaper, I always remember BBC Breakfast being on the TV screens. And so I was in. I would take into school and college a barrel of conversation. Discussions would take place in our lessons about some of the news agenda. Many would sit silently, wide-eyed and with a blank expression, to say they had no idea what was going on. Some just didn’t care at all. Sad. The news formed much more than an interest and passion. It developed me socially and almost everyone was aware (by the end) that I wanted to be a journalist because of my long-standing curiosity of world events.

I have always seen the news as a social tool, possibly more than a factual provider of events. I know of families who prevent their children and teenagers from watching television news because of the content. It’s too “negative” and “inappropriate”, apparently. I’m afraid that’s reality. Keeping young people in particular in some sort of bubble world will do more harm than good. Inevitably there will be discussions about news events and if they can’t answer then they look stupid. I’ve seen it happen. And more so, keeping individuals in a bubble world, away from the harsh reality of world affairs, is so very damaging and detrimental to a persons view of the world. Historic images of the starving Ethiopians, the September 11th terrorist attacks and subsequent war on terror are difficult to comprehend. Emotions run high – a mixture of anger, upset and loss all depict these images. However, if they are not broadcast, consider the impact. The need to help children in poverty is vital and without the news to display the efforts of charities and the plight of the victims is degrading to all. I am a strong believer that everybody, how old or young they may be, must be exposed to the reality of global affairs.

There is so much content for any age group. I always remember watching Newsround. Essentially, a news programme for children. Some of the harsh realities toned down and a duty to provide realistic and tackling issues to their younger viewer. Radio 1’s Newsbeat provides a programme select to it’s audiences of teenagers and young adults. Able to broadcast the news in a non-patronising format, yet a way that tackles the audience who may not be as interested. The likes of the ITV national and regional news are for the average mainstream viewer, varying of all ages. The content is selected for its mainstream appeal, often the ‘big’ stories of the day. That in comparison to Newsnight and Radio 4’s Today programme have a selected, high end viewer/listener and so content is selective and often more specialist. Online and news providers are at their most popular. Millions of users log on to the likes of the BBC News and ITV News websites each day, whilst Twitter and mobile phone apps have become a real force for providing news. The news is more reachable than ever.

It’s not just national broadcasts that are important. Regional news is vital. Whether it be on local radio, a local newspaper or a regional news programme, the necessity for local news services are as high as ever. Take the North West for instance, my region. Granada Reports and North West Tonight are both award winning programmes with award winning presenters and reporters. Not only do the programmes tackle hard hitting news – the future of the NHS, the Morecambe Bay cockle picking tragedy and the Hillsborough Disaster to name a few – the programmes also form a base for local residents and organisations to promote their own hardship. Local newspapers including the Liverpool Echo, Warrington Guardian, Manchester Evening News and so forth all dedicate space to tell readers about events local and relevant to them. Work at local charities and appeals for help are made through various regional medium. And that is what is so special about local news. It brings about a real sense of community and satisfaction when reading, listening or watching. Something everyone can take a leaf out of.

There will always be people who claim they don’t watch news programmes because they are “depressing” amongst other terminology. Whilst it is refreshing when more upbeat news such as Olympic and sports success and the royal family events dominate the agenda, I always remember being told a good analogy about news. Thousands of planes land at airports around the world every hour – It’s only the plane that crashes that the news will cover. It is perhaps a rather gloomy perspective but that is what viewers are interested in. Dramatic and extraordinary events. That’s what news is all about.

I believe it’s rather sad when someone says they don’t watch, read or listen to the news. It makes me think they are perhaps out of touch with the real world, real events and real world scenarios. The news impacts on every person. Political decisions touch everybody’s life. A Royal wedding brings millions of people together. Poverty ridden countries bring emotions to all who watch. Regardless of what someone’s interests are and whether they prefer politics to technology, the news is out there for everyone of all interests to take hold of. More than anything it is a duty to take an interest in news and current affairs.