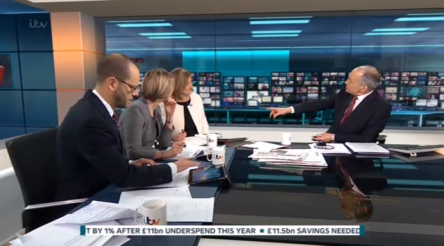 It is a rare occasion but when it does happen it creates a ‘sit up and listen’ attitude amongst viewers. Newsflashes have been around for the best part of nearly seventy years across the globe, bringing viewers a breaking story. Conveying drama, theatre and enigma, these broadcasts have exposed the very best of television journalism. An ITV documentary, ‘Newsflash’, looked back at the era of when breaks in schedules were the order of the day. But in the day of 24 hour news and social media, is this concept now at risk of becoming a past tradition?

ITN’s Julie Etchingham narrated the insightful documentary and it certainly proved to be a hit amongst viewers. Newsflashes go beyond providing impartial information to the mass audience. In the documentary, the emotions of some of the most iconic journalists in the British industry were apparent. Martyn Lewis’ crackling voice when announcing the death of Princess Diana and Alastair Stewart’s real upset when discussing the Lockerbie bombing made it clear that journalism goes beyond collating the facts of a breaking news story. It is a real human life story. Having the responsibility of breaking such heart-rendering news is surely difficult. If anything, the emotion portrayed through our journalists, highlights how real journalism is. Such emotion can never be conveyed through social media.

The death of Queen Elizabeth the Queen Mother in 2002 and the invasion of Iraq are perhaps some of the last major stories to justify newsflashes before the emergence of online media. Social networks such as Twitter now announce breaking stories before they can even reach the airwaves. Online, news corporations have their own websites, which act as a 24 hour service to millions of users, as do mobile phone apps. Today, there is no need for newsflashes, since all of our breaking stories are available on demand 24 hours a day. However, there is still something very special about breaking into ordinary programming to bring viewers unfolding and at times dramatic footage.

The most recent unfolding event was that of the birth of the Royal Baby. Even I have criticised the enormous amount of coverage given. Yet, when looking back, the unfolding enigma and theatre on the steps of the Lindo Wing at Paddington was far from a boring and un-interesting broadcast. From the announcement of the birth to the moments the new parents and their child left the hospital, the world and its media followed extensively the story break. Like many others who have spoken, the extended newsflashes on public and commercial broadcasters were gripping. There was something genuinely exciting about seeing first-hand the pictures of our new heir to the throne. The joy amongst journalists, including the BBC’s Peter Hunt and ITV’s Tim Ewart, was clear; both channels rushed to get the best images and best guests to keep viewers on side. Dedication, passion and heart for a story you simply cannot grasp from an online piece of journalism.

It is incredibly easy to understand that this and so many other stories of recent times could have simply unfolded online. The majority have access to a computer system. But that is not how journalism works. Online journalists are some of the best in the business, but journalism is about connections. Connections with guests, connecting with the story and connecting with the viewer. Television is a great medium to achieve the outcome of this formula. Television is a truly remarkable source of creating tension, creating drama and creating the news. Despite how many may ‘retweet’ or comment on a story, there is little excitement and sense of importance created.

Whilst I openly support television journalism, is there any evidence to suggest that soon social media will be the clear dominant force? There is clear evidence to suggest that social media is heavily breathing down the neck of our television journalists. On the BBC’s Breaking News Twitter account, there are over 7.7million followers. That is close, if not more, than the average rating for one of the main BBC One news bulletins. For those who don’t follow a news service account or attempt to avoid news online, it is a very difficult position. Given the amount of retweets per tweet made, nearly all users on Twitter are exposed to some form of news and information.

I readily admit that I use social media to keep up to date on news. Whether I’m working, away or elsewhere. But there is something quintessentially isolate about a computer generated piece of news. Yes, there is somebody at the other end inputting the news, but they are not a familiar face. The beauty with television journalism is trust. Many journalists have been on screen for years and build rapports with viewers. As you read a tweet about breaking news, it is objective and distant. If the BBC’s business expert Robert Peston announces a breaking piece of financial news, viewers trust his words, they understand and relate to his words, because of his familiarity.

The ‘Newsflash’ programme highlighted much of the programmes that have literally stopped people in their tracks. The September 11th Attacks, The Gulf War and the death of Michael Jackson, amongst others. There is something very special indeed about a breaking news story. It is very difficult to explain, but television journalists do a grand job of keeping viewers informed and enticed. On that note, television journalism still remains at the top of its game. Social media is a convenience but broadcast journalism brings reality and humanisation to a gripping theatrical piece of news.

ITV News presenters Mary Nightingale and Alastair Stewart bring us the latest on the snow.

British news has once again been dominated by the old trouble maker herself, the weather. Again. But is it really necessary for this same old story about travel disruption, power cuts and how we are coping in the “freezing conditions” to have the worthy of nearly half the air time of an evening news bulletin? I think not.

There is a clear argument for the reports on the weather, keeping viewers informed with any disruption to their travels and whether or not their kid’s school is closed. But surely this kind of news can be kept for a short update within a local news bulletin. News of how many schools have been closed in Wales and Northern Ireland is most irrelevant to a viewer in Newcastle. There is an art of recycling when it comes to weather news reports. The standard procedure applies as follows: Top headline about snow; travel disruption because of the snow; how people have been “battling the elements”; a warning from police not to travel; and of course, the question everyone wants to know – is more on the way? I guarantee if you watch a news bulletin on a ‘snow day’ this procedure or near abouts will be the one that dominates.

When it comes to reporting on the snowy conditions and “treacherous driving conditions”, there is an element of shock. That shock, however, is that the expense of other motorists. For instance, a common report on the travel disruption begins with scenes of motorways around the country which appear dangerous and un-driveable. But then follows the repeated phrase, “a number of accidents…” which then leads into footage of cars off the road, often in ditches, recognising how very dangerous the roads are. Sometimes there will be dramatic footage from a camera phone showing a car, sometimes a bus, sliding in icy surfaces. Very shocking. But then again, why would any driver be so careless to pass through icy conditions and put their own lives at risk? The ordinary viewer, who hasn’t ventured out because of the cold, voices their opinions within the family – “stupid”, “idiot”, “why didn’t they stay at home” – So whilst the reports do highlight the somewhat incompetence of drivers who ignore previous warnings, they highlight the danger on the roads, underlying the message of the danger in the snow and NOT TO TRAVEL..(unless absolutely 100% vital, of course).

Another regular feature which appears on ‘snow day’ news programmes is the art of crossing from the cosy and warm newsroom to the arctic like conditions of the Lake District, Glasgow, Belfast, Buxton, Cornwall and Cardiff (not always used), in the traditional ‘sweep’ around the country to get the wider picture. Mainly so a viewer in the south can comment on how much snow they have had compared to the North. Then follows the ‘Live OB’ – the Outside Broadcast. “Lets cross to Cumbria and get the latest from there…” proclaims the newsreader and then follows one of the single most depressing shots for anyone who wants to be a part of news – one of the country’s brilliant TV journalists, used to battling court room dramas and breaking news, stands freezing, covered in snow and red-faced, in a farmer’s field. There has to be some admiration for these reporters who brave the conditions to bring us the details of what is happening. Although, quite a lot of the time, the closures, conditions and power cuts that are being experienced in Scotland are quite the same to those in Cardiff. It is an endless ‘arctic circle’.

At one time, it used to be a novelty to have a news bulletin dedicated to the ‘chaos’ that the snow has brought. Nowadays, with climate change and differences to our weather patterns, snow is bedding down more regular. Where I live, between Liverpool and Manchester, there have been around four different snowfalls in the past six months! Despite that the same reports and information surface – Don’t travel unless necessary; check with your tour operator; stay indoors; check on your neighbours. Compare that to the United States where snow drifts are vast and we look like a country that can’t cope with the white stuff. The news is supposed to be an operation that provides the latest new news. Although each snowfall is new the news that surrounds it is far from that.

So don’t forget to take care in the snow and of course, in the words of great journalists and presenters, “don’t travel if it’s not essential.”